3 points on pauldrons in fantasy illustration

I'm sorry about the unimaginative title!

My armour posts seem to be among the most popular ones and I just got an idea for another one today.

Pauldrons are difficult, I won't lie. Armour in general is very hard to understand and to draw. And an illustrator usually needs to come up with acceptable yet innovative designs on a regular basis.

I won't even talk about massive Warhammer marine/Warcraft pauldrons, or pauldrons with giant spikes, those are a bit obvious and I'll leave them for an even less inspired post in the future.

There are three things I want to address. Let's look at the amazing drawing I put together five minutes ago: 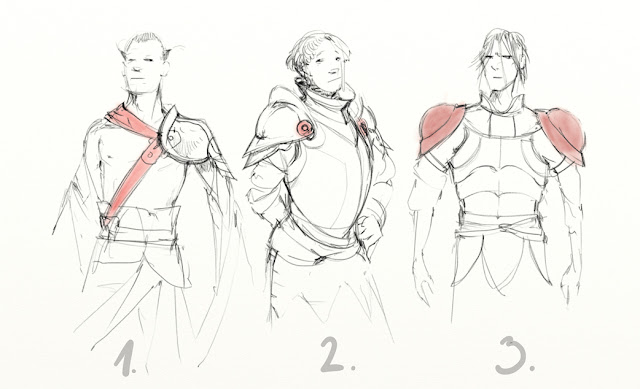 This is all for the sake of coolness and asymetrical design. Single pieces of pair equipment probably were used here and there, but more because of the lack of the other piece rather than any deliberate purpose. It's also much easier to strap and set up a pair of pauldrons. As we've no doubt seen many times, these pauldrons are magically held on the body by (often really crazy) webs of straps and belts. Often they'd make it very difficult for the person to move.

Everytime I see this, I have to question the sanity of people who'd choose to wear only pauldrons and no other armour, for whatever reason. Is it ideology or bravery like with the berserks? Well then a pauldron is just as armour as any other piece.
Is he supposed to be a "light" build? Some kind of a rogue? Why on earth a pauldron then? It's not like the shoulder is the first place anyone would attack, or a bodypart one needs to protect above all others. I'd wear a cuirass, or a padded jack in that case.

To me this is the equivalent of a chainmail bikini - a dinosaur of fantasy illustration we should forget.

I wonder who came up with the idea. Some unfortunately placed rivets on an original armour might have deceived him. Or maybe he just thought this was how it worked.


Pauldrons are not riveted to the cuirass. No.

Still, fantasy armours repeat this design over and over.
You even see it in movies (and boy oh boy, does it show how uncomfortable and awkward it is!)
- I'm looking at you, Dungeon Siege!

And man, does it NOT work when you make it into a costume!

So how were these things attached to the person? They were usually tied onto the cuirass/gorget/padded jack at the shoulder/neck. No, it doesn't flop around wildly, you can always put a strap going under the arm to hold it in place.
Putting the weight on the shoulder is a good for mass distribution and it doesn't get in the way of any movement.

3) Pauldrons wide enough to make you stuck in the door

Pauldrons are not just any massive bowls you stick on your shoulders. There are many different types and shapes, all very specifically shaped to fit the body very tightly and closely. You want to be a small target, not a huge one. You don't want it to change your balance.

I get it, wide shoulders make the silhouette seem powerful. I beg you, do it with the actual shoulders and then put pauldrons on those, don't put massively wide protruding pauldrons on narrow shoulders.

Illustrations like that remind me of American "football" players stuck in that harness of theirs. They have padded shoulders, because they want to tackle people.

There's no shortage of large "shoulder pads" in historical armours, but they're designed in a way that makes them cover a large area while remaining fairly close fitting: I've posted mainly medieval plate armour as examples of how it "should" look. For a good reason - most fantasy is still based on our limited view and understanding of medieval Europe. Sure, it's changing, we're adding Asian and other influences. But the majority of knights, paladins and other armoured characters still wear "knight armor".

We could speak about more "primitive" shapes and designs like the tube-and-yoke armour, or the lorica segmentata. But we won't, not today. :)

I'd like to stress this is not a hate post, meant to tell all illustrators how dumb they are. Far from it!
The portrayal of fantasy armour IS getting better and better all the time.

These are just my personal pet peeves with pauldrons, that's all. Now you know how to do it LESS WRONG! ;P

Have you seen stuff like this before? I'm sure you have. 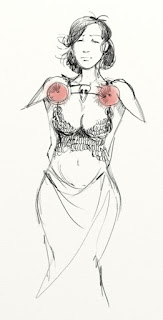 Those funny looking discs around the shoulders, or the armpits. Preferably painted on amazon warriors clad in mail bikini.

How? How do those make ANY sense at all? These things are called "besagues" and they're meant to protect the wearer from blows or blades slipping between the pauldrons and the cuirass - into the armpits where dem arteries are.

I only wish the artists hadn't forgotten to pain the cuirass and the pauldrons on in most cases.