Candy From a Stranger

Here are the last two black and white illustrations I did for Picks and Hoes. The more I've done of these, the more I started to enjoy myself. 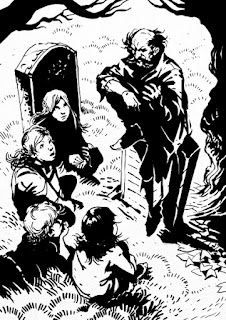 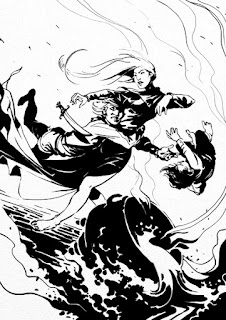 And here's a cover for a book soon coming out by Moon Design - a wonderful tome about the city of Pavis.
It's been done for quite some time now. It's not at all how I meant to do it, still I'm quite content with it.

This image was a challenge - a first real piece in colour (and a cover at that) I did after a long time of doing greyscale quarter-pagers.
I had a 3D model of the city, which was of huge help to me. Thank you, awesome Glorantha fans, who make 3D models like that. ;)
It was much easier to pick an interesting point of view while keeping the architecture and layout completely accurate this way.

As soon as we started talking about it with Jeff, I knew I wanted to have the sun play a major role - the first sketches were done in normal yellow midday sunlight, but a scene of worship atop a zikkurat just begged to be happening at sunset/sunrise.

And dragon worship used to be a big thing in Pavis, apparently, so I put in dragon banners waving in the wind, hints of dragon shapes in the smoke of the scensor and the scensor itself is shaped like a dragon too.

Then it was just getting the lighting and mood right, painting all those people in the square and keeping the perspective right on the priests.

Some random guy at Dragonmeet last year told me it had "good lighting", so I see it as a success. ;P 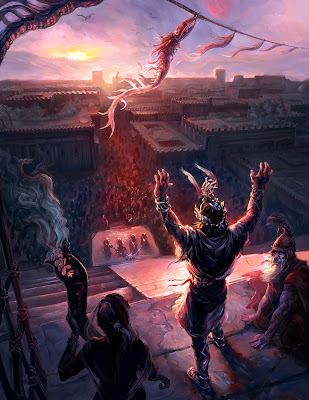