This morning I was thumbing through my copy of Costume of the Ancient Eurasia by Sergei A. Yatsenko and a certain piece of sculpture caught my eye: 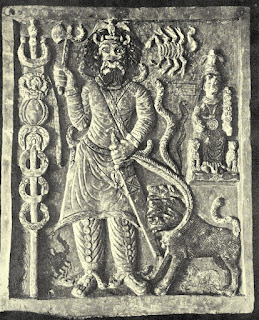 This is identified as "Nergal from Hatra".

Found in Iraq, obviously Parthian, it immediately reminded me of a statue in the Government Museum of India, from the Mathura school: 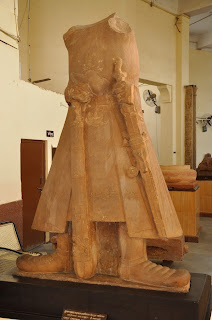 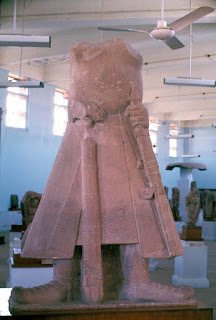 Now, they might not look that similar at first. What stood out to me especially was the sword! Why? It's a Central Asian type of sword, sometimes called Sarmatian type 1, believed to be derived from Chinese western Han dynasty swords of an earlier period. (often found in Sarmatian graves, typically with jade fittings - disc pommel, chunky box-like crosspiece, a scabbard slide and another piece for the bottom of the scabbard)

The scabbard slide isn't apparent in the Hatra sculpture, perhaps due to poorer ability of the sculptor (it's definitely less realistic and finely carved), but otherwise the form is very close. Especially the pommel, which in both cases ISN'T a disc (as is typical for the Sarmatian/Han swords), but some kind of curved shape, sometimes interpreted as an animal (snake or bird) head.

The basic form of the costume is similar, but that's not surprising between two cultures with a nomadic tradition.

I'm not the first one to point out the similarities either, John M. Rosenfield in The Dynastic Arts of the Kushans draws a comparison between Kanishka and this statue of a Parthian officer (also from Hatra), emphasizing the importance of the sword being displayed:

Same could be said for king Uthal's statue: 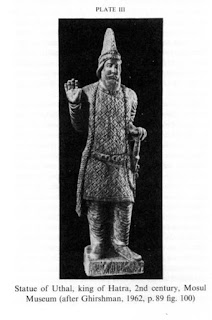 I tried to find out more about why this relief is thought to be depicting Nergal. The other important thing I noticed about the figure - he also carried an axe.

In her paper titled "My Lord With His Dogs", Lucinda Dirven says:

A great many of these shrines are centred around the cult of a Herakles-figure, who was worshipped in Hatra under the name of Nergal.


Portrayed in hymns and myths as a god of war and pestilence, Nergal seems to represent the sun of noontime and of the summer solstice that brings destruction, high summer being the dead season in the Mesopotamian annual cycle. He has also been called "the king of sunset". Nergal evolved from a war god to a god of the underworld. In the mythology, this occurred when Enlil and Ninlil gave him the underworld.

I've not heard of a pestilence aspect associated with Herakles before. Wiki says there was a solar aspect of him as well, which I'll have to believe. Still, nothing that would suggest an axe attribute to me. (axes, clubs or maces are typically attributes of thunder gods, or the non-thunderous serpent slayers. This would make sense for a Heraklean aspect, not so much for Nergal.)


The pronaos of the shrine yielded a plain bronze plate with the inscription nrgl klbʾ. 23 The cover of an offering box representing a dog in relief was, according to the fragmentary inscription, made for Nergal.24 The base of a statuette of which only the bare feet, lion skin and club remain, has an inscription that dedicates the object to nrgl klbʾ. 25 In the same shrine, an alabaster statuette of a dog was found, with an inscription on the plinth mentioning three dogs (fig. 1).26 Although Nergal is not mentioned in this text, it is probable that the dog refers to his cult. The same holds true for a small altar with a representation on the front of a male figure raising an axe.2

Lion skin and a club sound appropriately Heraklean. Perhaps it was through the lion skin that the connection to Nergal was made? (Nergal being depicted as a lion)

Dirven then follows with:


The dogs have a snake for a tail, and from the collar around their neck hangs a bell. In addition to the dogs, the god is associated with snakes and scorpions. Of special note are the two snakes that rise like a crescent from the god’s shoulders.

I'm most likely reaching, but various thundergods are associated with serpents (for obvious reasons) and snakes (and Heraklés of course killed two snakes while he was still a baby in a crib. An image, by the way, I've always found curiously similar to the Master of Animals motif...), some even with scorpions. (Frex: A Czech "weather saying":  "Na sv. Jiří vylézají hadi a štíři." = On st. George's day the snakes and scorpions crawl out.)

And what of Kanishka and his massive mace?  I see both the axe and mace as divine weapons (swords representing the earthly warrior weapon). The mace is described by Rosenfield (p.179) as a "makara", referring to the carved metal head, depicting a monster.
https://en.wikipedia.org/wiki/Makara_(Hindu_mythology)

Rosenfield then lists several examples of Makara bringing destruction, as well as another aspect of the club being a symbol of justice. (held by the ruler)

Again, I might be reaching, but I'm reminded of the duality of Thunder Gods' axes, hammers and maces in various IE cultures - beside the destructive thunderous use of the weapon, the other end of it often had other effects:
- The Balts would throw axes in the fields, put them in the path of newlyweds and under their bed before their first night together. (all to increase fertility)
- In the Voroněž region, Slavs would throw an axe over their herd and into a fire, to ensure fertility of cows and also their safety.
- In the Ukraine, axes were used in birthing rituals and later put into newborn's cradles.

And let's not forget that Thór's hammer Mjölnir and Irish Dagda's club could also raise the dead!
(all examples from Perun the Thundergod by Mgr. Michal Téra Phd.)


Where am I going with this?

It would be quite interesting if Kanishka, famous for his efforts in spreading of Buddhism, had himself sculpted as a thunder deity.

Then again, we know Héraklés made it into the Buddhist pantheon as Vajrapani, guardian of Buddha himself!
https://en.wikipedia.org/wiki/Vajrapani 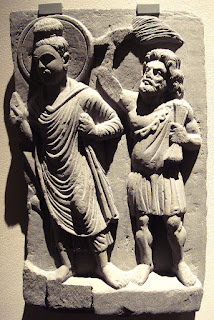 This depiction is Gandharan, from the 2nd century AD. So perhaps it's not that much of a reach.

In summary: I noticed two swords looked kinda similar. Turns out I wasn't seeing things and that while we might end up with a bit of a divine goulash, looking for these connections is fun.


UPDATE 19/10/2017 - the Twitter account "Gandhara Connections" (- "Gandhara Connections is a project by @CARC_Oxford to advance the study of Gandharan art and its links to ancient Greek and Roman culture.") posted a photograph of a Gandharan relief fragment.
https://twitter.com/GandharaConnect/status/920236519838900224 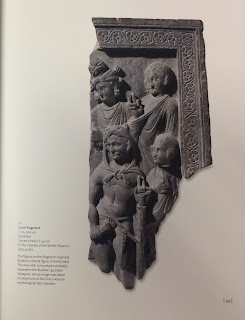 It's from around the same period as the one above. And there he is! Vajrapani - Héraklés guarding the Buddha, very recognizable in his lion skin. And yes, with a very familiar sword hanging from a scabbard slide at his side.
He also holds a "faceted vajra" in his right hand (described so by the British Museum), which is what he's more commonly shown to hold in Gandharan sculpture. I wonder if the facets of the vajra reflect the facets of the Makara mace. (certainly it's one more sculpture holdin two weapons, one divine and the other a sheathed sword)
More info on the relief is here: http://www.britishmuseum.org/research/collection_online/collection_object_details.aspx?objectId=246720&partId=1

Came across this statue of Heracles with a club and bowl from Hatra, 1st to 2nd century CE.
The club especially makes me think of the Kanishka statue.
("This limestone sculpture was excavated in Hatra, Iraq and was one of the gifts of the Iraqi Government to Japan. Currently displayed in the Tokyo National Museum. Photo taken on July 11, 2019.") 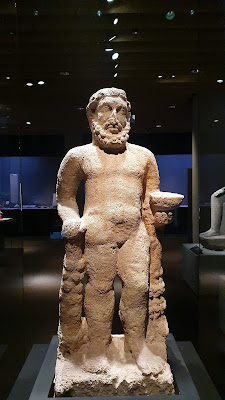