The hand that wields it

"What is steel compared to the hand that wields it?"

Tonight's post will be another in the "Drawing swords" series!

In the past I've talked about the importance of proportions, axis alignment and other aspects of a good sword drawing. Now we'll talk about weight.
Swords being portrayed as heavy unwieldy bludgeons is a trope I try to fight against. However, in art, giving a sword some weight can be a good thing.

How much do swords weigh and why do we care?

It depends on the sword. You can completely disregard any talk of swords weighing more than 3.5 kilograms.
The biggest swords ever weighed around 5-6 kg and the heaviest among them are considered to be either executioner swords, or parade weapons not intended for actual combat. Of course, weight would depend on the user, strong men could afford really big swords. But!
We're still talking about swords used with both hands, for very specific purposes.

Single handed swords would weigh from around a kilo, to about 1,5 kg. Interestingly - medieval longswords (used with two hands) would fall into the same range! (their blades are generally slimmer)

This is less than most people assume, but it's not an insignificant weight.

What does it have to do with drawing swords?

A lot of information about the human body's anatomy and pose is very subtle and difficult to construct without reference. That's why we shoot reference for paintings, using whatever props we have. We can definitely appreciate these subtleties in art if they're done right - everything just feels natural.

What do we look for with swords? Their weight should affect their wielder's bearing (how much depends on the desired "story" of the painting - are they out of balance, because they're swinging wildly? Are they entirely in control, like the cool calm blademasters they are?) and almost more importantly, the sword should look natural in their hands. A lot could be said about swords not really fitting into hands, clipping through space where palms or fingers should be etc. This can be avoided quite easily - just photograph yourself holding something sword-like. 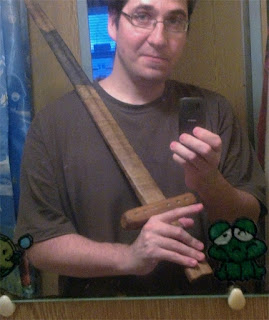 I apologize for looking tired in this pic, I was quite tired indeed. (as to why there is a stoned frog on the mirror, I have no idea) This is what I use for reference most of the time - an old practice sword. It's wooden, but the shape is quite close and it weighs around a kilo, so it makes a usable substitute.

Two things about using reference:
1) A sword is absolutely the best choice you can make. A broom handle, or a plastic lightsaber might work as well, but you're missing on some of the subtle differences. Sword handles are often not entirely round, instead they have an oval profile. Weight distribution and the object's overall weight also matter - a broom handle or a plastic lightsaber are both very light and will not make your hand and arm react the same way as a sword would. If you weigh them down, be careful where you're putting that weight. (you might end up with an "axe/mace" if you put it at the end of the stick) Most swords have a point of balance about a palm width from the crosspiece. A sword has a flat profile and edges, if you use a round stick, you'll lose that reference information.
2)  Learn how to handle a sword, at least the basics. Swing it about a bit, carry it around, even if looks silly. Get a "scabbard" and try walking around with a sword on your belt, try sitting down etc. Learn how to grip a sword properly - most people try to use swords like baseball bats, golf clubs, hockey sticks and other sports gear. (I wrote about that in my sword sins post) Most of the time their grip is way too tight. 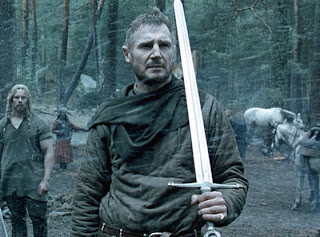 Kingdom of Heaven is a good film to watch for sword handling reference, Liam Neeson shows you that swords are not weightless and that it's badass and practical to rest one on your shoulder.

A painter who does swords very well (of course he does, he's a medieval reenactor himself) is John Howe. Here's a painting of his which has been among my very favourite of his for a long time - Yvain and the lion: 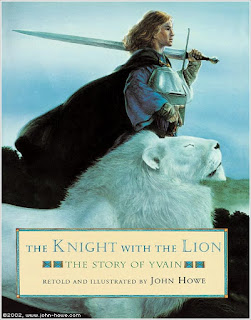 It may not seem so at first, but that's one big sword! But it looks just right, like it belongs where it is, resting on Yvain's shoulder as he gazes off screen.

Oh and here's another John Howe piece - "Tom Badgerlock" from Robin Hobb's novels. You can see he clearly took a photo of a friend in armour with a sword. (he describes the process on page 64 of his "Fantasy Art Workshop" book. 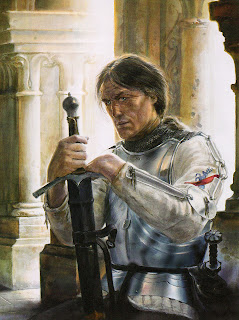 Specially for what the fingers do while handling a sword, I recommend watching real fighters and sword users in videos and going through their motion frame by frame. You can also use these frames for pose reference.
Here's a good explanation of a grip:
http://www.youtube.com/watch?v=q_xO88Ws6O0

I especially like his comment on mostly using the two middle fingers to grip, this is something I came to use myself. The outside two fingers do most of the sword manipulation and allow for a wide range of movement within the grip.
I don't know if this guy does any sparring, but his sword handling and cutting ability is formidable.
http://www.youtube.com/watch?v=Ti5N3MMQfdE

They're defenseless plastic bottles, but see how they mostly don't fly off and instead he's able to cut them into tiny slices? That's good edge alignment during a cut, there's little resistance that would otherwise send them flying. See how light the sword looks in his hand? That's practice right there. ;)

What you won't generally get from bottle cutters is real combat stances and intensity, their form is very controlled and they don't move about much. For intensity and intent, I'd recommend something like these guys:

They're using lighter training swords, so it's mostly for the way their bodies move during combat.

Certain aspects of John Clemens' interpretation of fencing manuals are disputed by many in the HEMA community, but you can see the many different types of grips possible in this video, it has nice closeups on the hands.

What should we do about it then?

Painting is often not about recreating reality exactly, slight exaggerations (of things rather subtle in reality, which we don't notice consciously) are quite necessary to make an image dynamic and to improve its storytelling.

Making a sword seem slightly heavier than it would look in reality helps ground it in the scene as a real object, it needs to interact with its environment and with the person holding it.
Looking for examples of my own art to illustrate this post, I realized I don't actually get to do many sword-wielding characters. I also noticed I tend to prefer a specific sword pose, where the sword hangs point down, its weight dragged into the cut. (possibly from a hanging parry, or a thrust position) 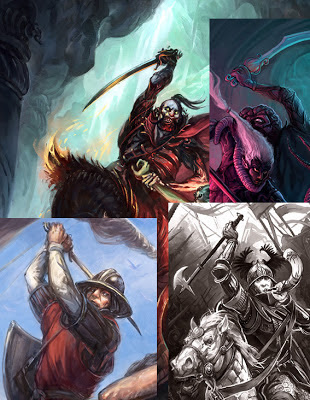 I now see things I could improve upon, but the general idea is there - the fact fingers are not wrapped rigidly around the handle, the wrist is not stiff and straight, the way the body turns into the cut (you don't cut with just the arm, it's like punching in boxing - the whole body twists to generate momentum).

That's it for today! It took quite a while to explain something fairly simple -

Remember swords weigh something, that they should look like your character is actually holding them, carrying them, or swinging them with force. Take reference pictures and know what makes good sword reference. Done! :)
Posted by Jan at 2:35 PM