No, I have not become a potter. As the Kickstarter for Guide to Glorantha races towards its end, it keeps raking the money onto a rather huge pile.

You can check it here:

I have been painting full page colour plates for it, very much in the style of Angus McBride's plates for the Osprey books.

Each plate depicts a culture-specific event, cultures being represented by four or five characters doing whatever they do and showing off their clothing, jewelry and tattoos.

Jeff Richard and I agreed it'd be good to show how one of these is made, step by step.

It all starts with Jeff sending me a brief in PDF. Like this one:

I spent one whole afternoon reading these briefs, googling images and going through my image library, looking for reference for each plate. 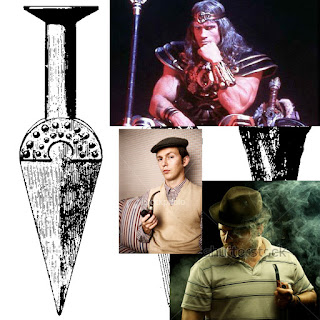 I should note that I don't use these images directly, they're not traced, they're not "Photoshopped" into the painting. I simply want to be sure about how this kind of stuff looks so that I can paint it looking plausibly.
This set of reference is for the barbarian bodyguard of course.

After gathering reference I attempt to sketch a composition of the piece. It's important to decide where characters stand, kneel or do whatever they're supposed to be doing. The have to be placed to make sense in the "story" and also to be well visible. That can sometimes be a problem, but here it was quite simple. A tight group of conspirators standing in a dark alley! Very easy. 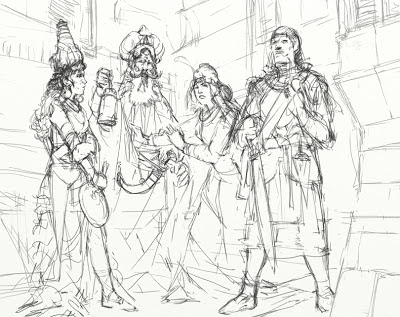 I draw and paint directly in a program called ArtRage. It produces a nice traditional look and it feels like using real paint too. (ie it's a struggle all the way through :D)
I actually drew this in two layers - one for the architecture (to keep it in perspective) and one for the characters. So if I needed to erase bits of the characters, I could do so without damaging the scene itself.

You can see I've done a bit of the character design in the sketch already. This plate didn't see many changes from sketch to paint, which is a bit unusual for me. 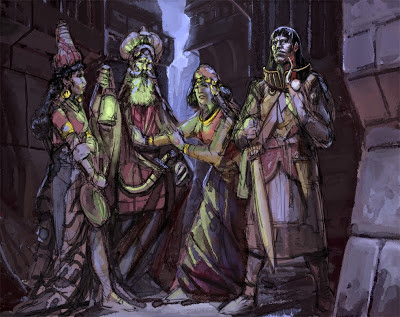 The scene as described in the brief sounds very dark. Dark alley, in the night, no street lights...I was a bit worried about that. I have to get light in there somehow! I suggested we give the sorcerer some kind of magical lantern and it was okayed by Jeff. I quite liked the idea of a night scene with a purplish tint to the dark city (which is pretty common in big modern cities due to air pollution. Not sure how that happened here, but hey. Artistic license, right? ;)) with a contrasting green light illuminating the characters.

You may notice the vertical and upper facing bits of buildings are coloured more towards cold grays, being "lit" by the sky, while the down facing bits are more purply. This would happen on a bright day more likely, where sunlight is bouncing off the ground upwards onto horizontal surfaces. So it's not very realistic to do this at night, but it serves as a nice compositional tool, to get some of the warm colours into shadows. That balances the use of warm hues through the image somewhat.
The bodyguard's face is also the first one I painted. I tend to start with getting faces "right", because they're the most difficult and fun to do. 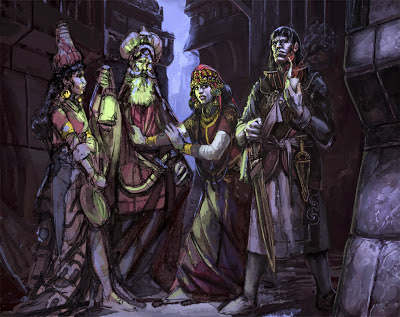 I did some work on the right side of the painting and noticed the bouncing light issue. I opted for a slightly more realistic depiction and darkened the shadowed area considerably. A lot of work has been put into the stones of the building and the barbarian's costume is mostly done. 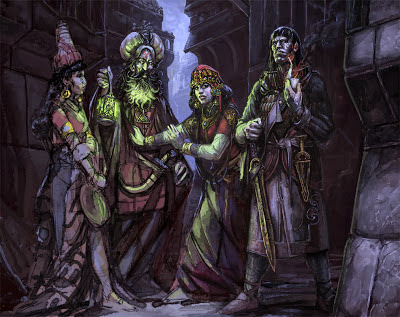 I finished the barbarian by detailing the sword, armour and adding runes to his face and arms. I decided the background could use some work, so I painted the buildings in the back. I've done some work on the noblewoman, but almost exclusively her upper half. Somehow the lower bits weren't so appealing to me in this image. I also started on the sorcerer and it was really fun and easy for some reason. The green light was a joy to use too. 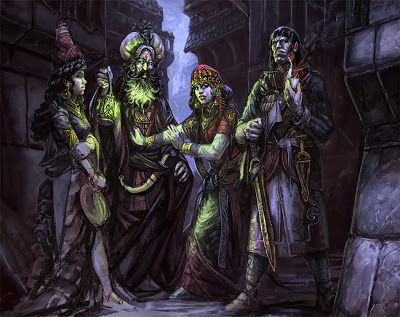 This part was a mix of fun - painting the face of the priestess and less fun - painting the lower halves of the sorcerer and the noblewoman. Lots of ornaments everywhere. I also realized the lighting wasn't quite right on the left wall, so I added cast shadows and half shadows, which framed the figures better.

The last step was to paint the priestess, her frilly skirt, tattooed legs and tighten everything else that needed fixing or detailing. I decided to add ornaments to the stonework to the right, including the Harmony rune inside an Earth rune. I thought those two would be a good choice for masons wishing for their building to last. (that wasn't in the brief, just my own initiative after learning the runes by heart :D) 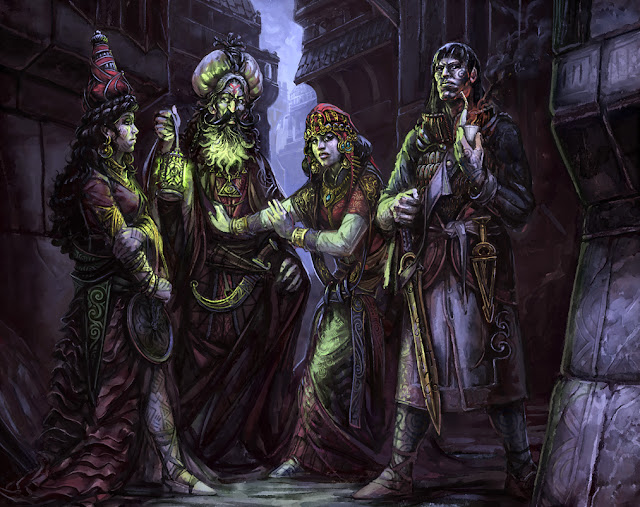 My biggest fear:  The architecture. I'm not very confident about buildings, but it ended up being surprisingly alright. Darkness did help for sure though.
My favourite bits: The whole barbarian bodyguard was my favourite from the moment I got the brief. His pipe, his scratched and notched sword, the lamellar vest and (my invention for no reason) the detachable sleeve of his tunic. I also quite enjoyed designing the tall headgear of the high priestess and the mitre helmet of the sorcerer. That one especially! I really enjoy how it shows his painted forehead and how it's using his own hair to attach itself to the head. (look closely, there's a knot of dreadlocks at the top, going through the tiara)

Now what are those heavily embroidered flappy flaps going through the ring belt on the noblewoman? No idea. :) Any suggestions?

Thanks a lot for reading! I hope you'll enjoy the plates when they're all printed in the Guide. I know I will spend a lot of time gazing at them lovingly. ;P
Posted by Jan at 11:43 AM