What an imaginative title!
I was asked to paint the cover image for the new Bestiary for Dračí Doupě 2. (an RPG I've worked on before)

A bestiary is a book full of beasts. Oh, wait! It's like the Monster Manual. There. Now you know.

The scene was supposed to depict a battle of two ancient creatures - Kostěj the Immortal and the Spideress. Kostěj is a bit like a lich, only Slavic and with his own style. He maintains an illusion of a handsome knight, but if you touch him, or break his spell some other way, you see his true rotting form. He rides a magical steed.
The Spideress is an ancient spider demi-goddess, awoken from her Cthulhu-like slumber, possessing cultists and building a lair in an abandoned underground temple.

You can see the front in a larger version on my DeviantArt here: 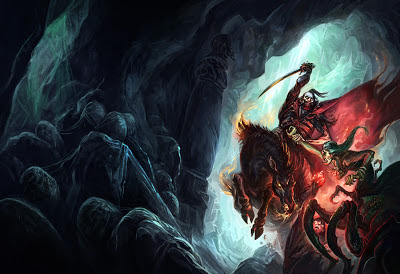 As usual it's painted mainly in ArtRage, some bits were added in PS. The cave is inspired heavily by the Macocha chasm: