Paladins are so OP

I've been thinking about companies I could approach while looking for work. Paizo came up naturally - their main product, Pathfinder, seems to be very popular with players and all the good artists work for them. (gosh, what shallow reasons, right?)
And I thought they may be easier to approach than let's say Wizards of the Coast.

So a few months ago I started going through their art, trying to pick out something I could do, to show I can do their IP and do it with my own twist.

I'll admit, I've never cared that much for paladins. I never had Keldorn in my party in Baldur's Gate II, I never played one in tabletop roleplaying games. Playing a paladin felt almost as a cheat, they were great fighters who could also heal, turn undead and bless. (Yeah, clerics also, I know.)

Still, I really liked the design of Seelah by Wayne Reynolds. Seelah is one of the iconic characters in Pathfinder and I chose her for my portfolio illustration.
I liked the whole backstory with the paladin helmet, I liked her hairstyle, the fact she used a sword and shield and most of all - the confidence the artist painted in her face and posture. This paladin will smite evil and chew bubble gum. She just happens to be out of gum at the moment.

It's quite interesting to go through the Paizo blog and see all the different interpretations of this character by various artists:

I began by doodling Seelah's angry face while gaming with friends. (note - drawing just a head and then trying to use it in the final drawing = bad idea)
Then I struggled with the pose. I wanted her to be cutting up some undead, in that Japanese style where they're already falling into pieces as she's finishing her swing.
The pose I am not too happy with. For one, an overswing this huge (that it tips you out of balance) is a no no in swordfighting. I should've probably gone for something with legs spread wide, stable, heavy and powerful looking.
But I also wanted motion and the destabilizing power of holy wrath to show through in the composition. So I went with this one. (in the end, as it often happens with my battle poses, I found out I've been ripping off Frazetta big time) 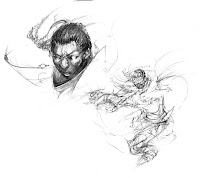 The next step was a drawing of the whole scene (in ArtRage) and a rough color study (in PS). 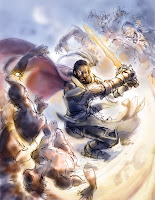 Mmm, yeah. Ghouls swarming behind her, ghouls being cut up into pieces in the foreground. So far so good, although in hindsight this was way too loose. (which I came to curse later)

I dove right in. You can see I rendered Seelah's face completely, while other parts of the image are almost blank. Yep, that's not a good thing to do either. 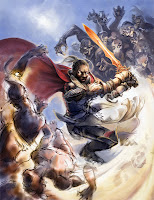 For some reason I decided to add knives to the ghouls. I don't remember why exactly, maybe I thougth the left arm was almost hitting a tangent with the cape and instead of changing that one thing, I added many other. Yeah, strange idea, not sure it worked very well. (I lost that implied circle in the composition, got a sort of a teardrop shape though. That's not too bad.) 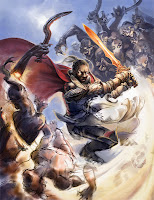 Next step is a big jump, I didn't save the progress in between. I rendered a lot of the ghouls in both foreground and background, Seelah's armour and FINALLY decided to do something about that lazy looking cloudy background. (yay for ruins)
The armour I ground my teeth over. I adjusted the arm pieces a bit, because  I couldn't quite see how it would all hold together and move properly. The legs I couldn't do for a long time, the exposed knee is just not right (in my very humble opinion). I don't remember why I didn't put in some kind of inner knee bowl, or a piece of mail sewn to her pants, maybe to stay true to the design.
Anyway, lots of little bits and pieces of equipment to be painted on Seelah, that's for sure. 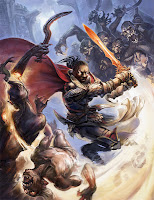 Then it was a matter of rendering more ghouls and dealing with the shiny flame path of her swing.
Right. If I planned this right, the sword would've been nearly white and the brightest point of the painting, the trail being sort of faintly visible. This way I had a very red hot iron looking sword and a blindingly bright path. What now?
Color Burn layer to the rescue! (in ArtRage! I very rarely use fancy layer modes in AR, but this time was a necessary exception.)
You may also notice there was a weird face thing under the shiny path in the previous version. I only noticed that near the end and almost by accident changed it to Seelah's tower shield. I quite like the idea she swung so hard her shield straps got torn and the shield flew from her arm. (win by accident? \o/)

Then I exported it into Photoshop, tightened up a few places, fixed values where needed, added a bit of glow, pushed contrast and hightlights. Voila! It's done and I need to not look at it for a few days. ;) 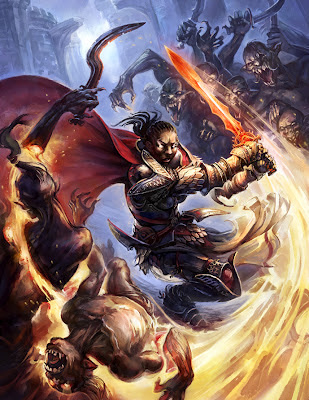 This painting hasn't taken longer than usual, but I painted it in bits and pieces when I had the time, mostly during weekends. This is a bad approach for me and it only made it more complicated. By the end I wasn't pleased with it at all and simply wanted to have it over with. I realized the many mistakes I've done and that fixing them would simply be a waste of time. So I bit my forearm and pushed through.

A good lesson it was, I have to plan better before I actually start painting. It didn't end up as horrible as I feared though. Especially the Color Burn layer at the very end made it jump from "what the hell am I doing with this?" to "Oh. I kind of meant for it to be like that in my mind.".

We'll see if it helps me get some work for Paizo!