It's alive and well.

What is? The Creature of course!

Recently I've had the wonderful opportunity to paint a new one for me - the Frankenstein monster!

The most generous and busy Jon Hodgson passed me this opportunity - to work with Iain Lowson on a cover image for his Dark Harvest anthology.


What if Frankenstein got it right? What if Victor Frankenstein had embraced his discoveries rather than seeking to destroy them?...

Dark Harvest: Legacy of Frankenstein is a detailed, fascinating game setting, a terrifyingly plausible alternative history and a fiction anthology; a gothic horror fantasy that will appeal to gamers and the general public alike.

The brief I got asked for the Creature watching a Promethean train (the flaming hand logo included and illuminating the rail tracks) from across Danube (over the Iron Gates gorge), looking grim and powerful.

Which is quite the compositional puzzle. Here's what I sent Iain along with the sketch.

The image as described in the brief gave me quite a headache. There's a compositional issue as well as a narrative one - how to show both the train and the creature (and their interaction in the story), as they're important elements, clearly at the same time?
At first I did a more of a landscape shot and angle - behind the creature's shoulder, silhouetting him against the moonlit gorge with a rather tiny train going along in the distance. That felt a bit boring, as there wasn't much motion in the train, we couldn't see the design, Promethean logo and all that. Nor could we see the creature's face with his "grim look".

I looked at the previous covers and was intrigued by the first one - the idea to combine different shots into one image and create a collage. I've never done this as the kind of illustration I do isn't suitable for this approach. But here it seemed like it might work.

Trying to tie it even more into the existing material, I used a similar angle for the train bit as it appears in the comicbook page I have as reference. I put the creature on a rocky slope, actually climbing, or hanging off the rock. (hoping to put some latent strength and implied force in his pose) 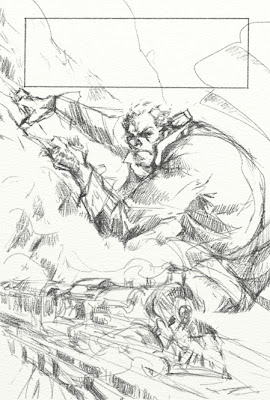 The sketch was approved and I went from there. The Creature turned out to be a joy (!) to paint. The face (which is a part I always spend the most time on) was done in about half an hour!
The train on the hand took a while. I haven't painted a train before, and even this one is more of an idea of a train, rather than something actually functional. Steam implying speed and movement and the train's lights also proved a bit tricky to paint.

Iain liked the final result, but felt we needed to make it more obvious the Creature isn't massive and dangling right above the train. To do that I lightened up the seams between the two parts of the image, putting more distance between them. I also added a colour shift, from a greenish moonlit side of the gorge to a colder blue one where the train is going.

Here's the final cover! (as always, painted from scratch in ArtRage Studio Pro) 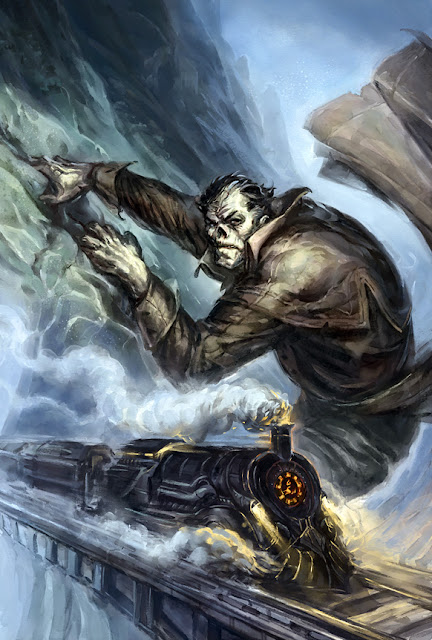 Thanks for watching!
Posted by Jan at 3:12 AM