I don't get to do personal pieces these days. I don't have the time to draw or paint everytime I think of something cool, in fact it's mostly not worth it.

But some ideas stick with me, crawling in the back of my skull. Some of them scratch their names on the wall and I can't get rid of them in any other way.

I have to paint them.

Many of these are quite silly, or strange, like this one. A painting idea is like a minibus full of stray thoughts, hopping on and off before and even during the painting itself.

Guardian of the Grapes

If you're the last person on Earth who hasn't seen the video:
http://www.youtube.com/watch?v=8UVNT4wvIGY
http://en.wikipedia.org/wiki/Gregory_Keyes
The world full of gods and people interacting with them in a very common and regular manner appealed to            me.
For some reason, an image of the singer in makeup, but warped into inhuman form with dark godly eyes emerged in my mind. And so did the words - "guardian of the grapes".
And I knew who he was. A lesser guardian god, protecting a sacred grove of olive trees, among which wild grapevines grow.
He's scary at first, hulking large, with knobbed joints and clumsy limbs. His eyes are beyond the point where large pupils are cute, they're already quite creepy and alien. He's not evil though, he doesn't hurt people. He just wants to be left alone. If only those pesky humans didn't like his grapes so much!

And that's it. I knew exactly what he was, what the situation was - a group of girls tried to pick grapes in the grove without performing an appeasing offering first. The guardian is blasting out of the bushes, vines tangled around his arms, smashing everything in sight and trying to scare them away.

I painted this in the past two months, not having time for proper painting (yay for university! :)), doing ten to twenty minutes here and there. Today I felt it was finally there. I may tweak it some more, but that's the good thing about personal pieces. It only needs my approval right now. ;) 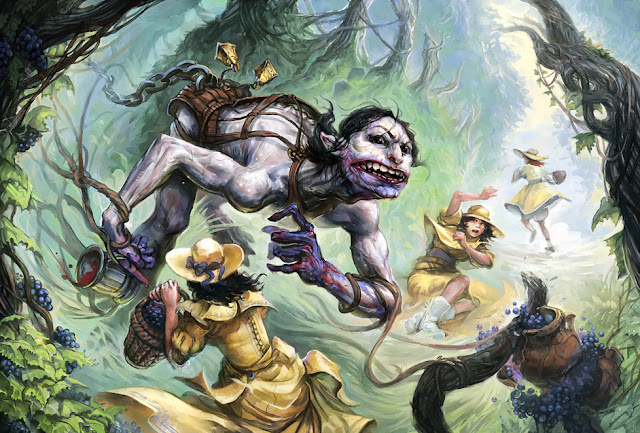