This is the first of a couple posts about the game we've been making in the past few years, which is going to be released on the 28th of June 2018. You can preorder it here:
https://itunes.apple.com/us/app/six-ages-ride-like-the-wind/id934012726?mt=8

Each event in "Six Ages", like in "King of Dragon Pass", is accompanied by a handpainted illustration.

This post will take you through the steps necessary to get to that illustration.

Going into "Six Ages" and out again, trying to paint for other clients were both interesting transitions.
There were a few general guidelines for the scene art:
- in most of them the "camera" is positioned at human height level, so it feels like we're looking through the eyes of someone in the scene. Tilted camera angles are reserved for the "weird" situations where something is wrong, or magical.
- we're in the Storm Age, a mythical time. So colours are sometimes more vibrant, things might feel a bit "more" than purely realistic.
- for the sake of clarity, both visual and that of storytelling, local colour of some objects was emphasized. (things like clan symbols, specific embroidery and so on, so it's immediately recognizable who's who)
Because the game is also going to be released on mobile phones, every scene's composition had to work on multiple levels.
- the scene needs to work as is, with no dead space and clear storytelling. As balanced a composition as possible.
- the scene also needs to be recognizable and the storytelling has to work with one half of it covered up. (because the phone version displays text over roughly 40% of the screen) This was an interesting challenge and I feel we mostly did quite well.

Other than that, the style we went for was derived from the one in KoDP, moving slightly towards "belgian graphic novels". (the technique is still ink + watercolor)

The majority of scenes went through 4 stages, each one with possible revisions.
Thumbnail -> Pencil drawing -> Ink drawing -> Colouring

An unofficial fifth step was mostly up to me - postprocessing.

Every scene begins with a text description like this:

"S359. Description: our warriors come to us to make a demand.
text: <w>, who serves on your clan council, has been stirring your elite warriors up against the <otherClan> clan. Calmer sorts point out that the <otherClan.plural> are already on the brink of a declaring a feud against you. When they point this out, <w> and <his/her> fellow hotbloods say this is exactly why they need to be brought to heel."

Towards the end of development I could continue without a thumbnail, because the example scene I'm going to show was fairly standard.
Here's a thumbnail of another scene: 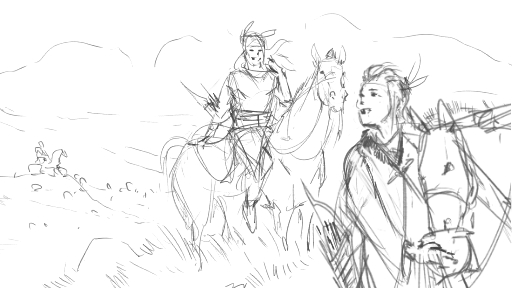 As you can see, they're very quick drawings to establish where characters are, some basic body language, but which can be quickly rearranged and redrawn if necessary.

I knew for this scene I wanted two characters in the front, making demands of our clan elders. Since the complaining warrior can be either male or female, there is one of each. 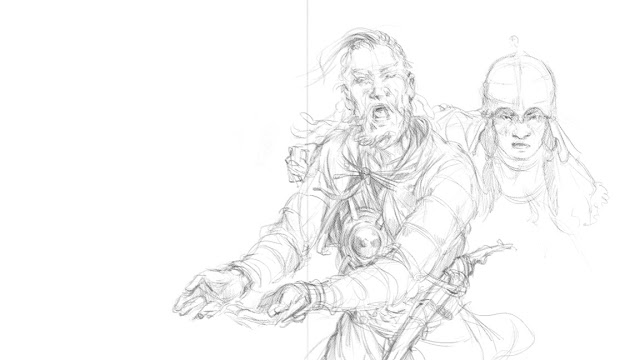 (as you can see, I placed a vertical line through the centre, to remind myself of the one-half composition guideline) 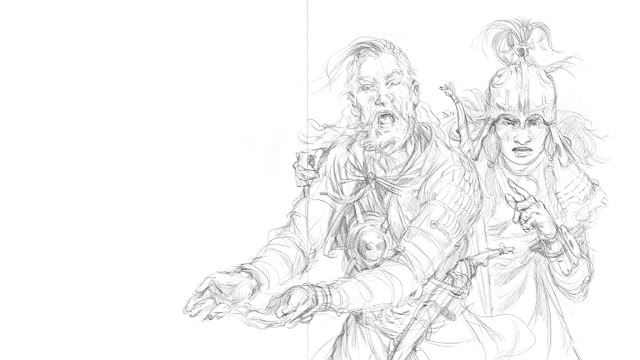 Now that I was happy with these two, it was time to move further back. 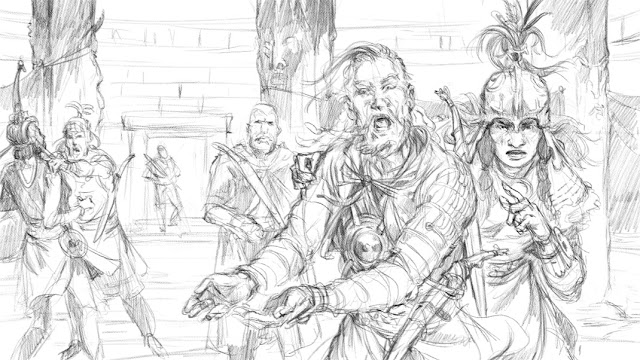 I'm planning a further blog post about inspirations for the Hyaloring culture, and I'll talk more about the clan hall there.
This sketch got some feedback and it wasn't immediately clear what the action to the left meant. I wanted to show that some of the warriors were getting physical with our elders, trying to convince them of something.
David felt that was too much and so we went with a revised figure (below). That way this art is applicable to several different scenes/events and thus more efficient. 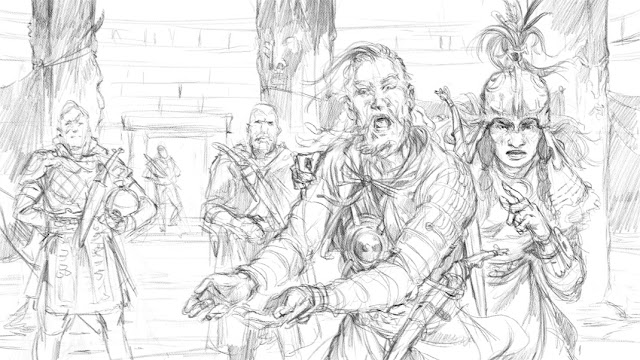 At this point I also got feedback on the costuming, the woman to the left's skirt was a bit short. With that in mind, I moved onto the next step - inking.

In some scenes I chose to ink only the foreground and keep the background in pencil (but neater and more detailed), because that allows it to visually recede. Thick ink lines push themselves to the foreground. 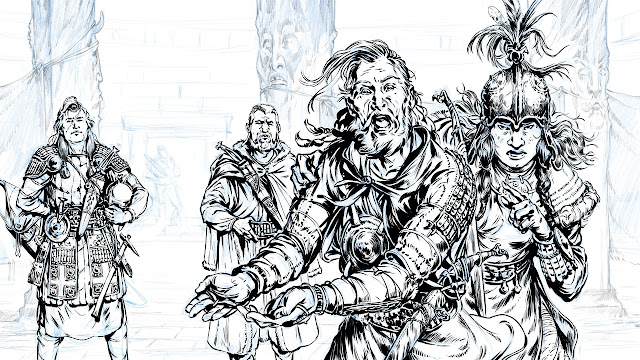 I think inking is my favourite stage, it's just so relaxing. There's still a lot to figure out, but I can relax the more constructive part of my brain and just get into the zone.
The image is already there, I just need to "carve" it out.

I use a Russian brand of watercolours called "St. Petersburg White Nights", in case you wanted to know. There's honey in them, apparently. (I did not try eating them! :))
I didn't take any in-progress photos, unfortunately. My setup looks like this though: 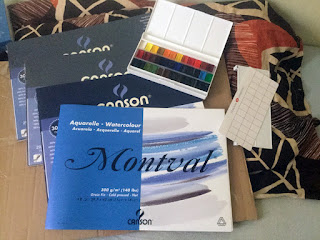 Notice the very much professional lighting system? (I would only assemble that for long nights of colouring. It was actually quite useful, since it could be taken apart quickly and I didn't have to buy a tall standing lamp.) 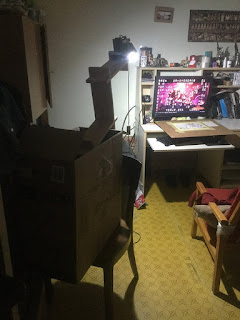 Here's the coloured scene "raw" from the scanner: 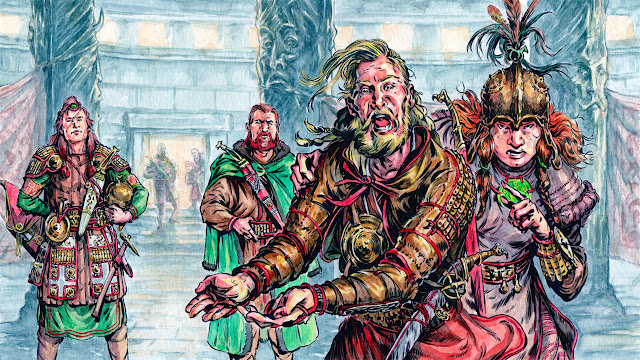 Some of the feedback was fairly typical - the clan insignia wasn't very clear on the foreground figures. So for clarity I changed the hue of some parts slightly, so that the double red line of embroidery stood out more.

The final scene art after post-processing looked like this: 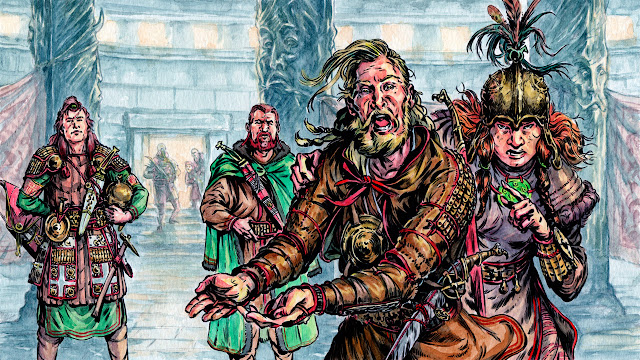 Next time I'll write a bit about our research and some of the real world inspirations for our protagonists - the Hyalorings.