Putting Together a Fantasy Sword

A comment on the potential historical influences of one of my older paintings for "The One Ring" made me think about how I came up with the objects depicted in it. 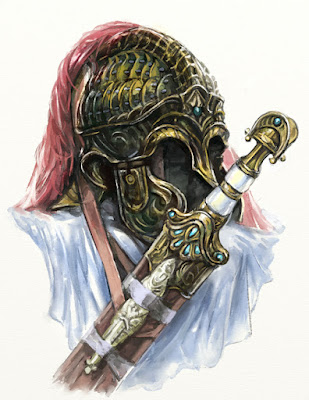 Here's an expanded version of my reply:

The helmet is a composite - the lower/face part is somewhat ancient Greek, but could also be late Roman. The bowl is lamellar, which is more of an eastern construction. The intent was something like a mythical eastern Goth style. (there wasn't a set fictional culture for these artifacts in the art brief so I went with a general "dark ages heroic" style made up of various bits and pieces)
In hindsight, I only wish I did the tail crest better, the way it's attached to the top ridge is quite unclear and lazy.

Here's a compilation of some of the inspiration pieces mentioned: 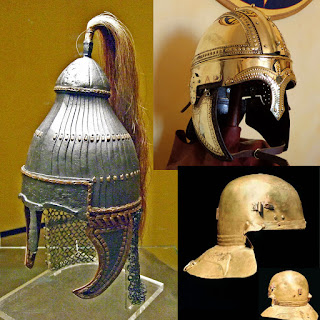 Also I think La Tene scabbards had an attached scabbard slide, whereas I used a sepearate piece slide, which is more fitting for migration period spathas. (and was adopted from the East, all the way from China)
If I were to change anything now, I'd make the wrapping around the scabbard slide better, some kind of twine or string rather than cloth. (or whatever that was supposed to be) Also maybe the slide itself is too clearly antropomorphic.

Here's a compilation of the sword bits I used as inspiration: 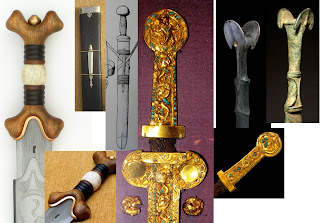 I really like this approach to design, it's enjoyable if a sword or another object isn't immediately identifiable as from a specific place and era. It's important that it still fits the general level of technology and mood of the project though!

Just reading about swords a lot helps, seeing what was used throughout the ages. The various designs become building blocks in your mental library that you can eventually pick and piece together quite quickly as they make sense functionally and aesthetically.
Posted by Jan at 5:59 AM