This one will be a (not so) short meditation on the practicalness of ancient and medieval armour.
(there's art at the end too)

Some time ago this Tumblr post was put together as a reaction to the "Women in Reasonable Armour" thing. I don't understand Tumblr, so I have no idea who actually wrote it, sorry.

As the author states, this "counter-point" was meant to show that:


"... practicality isn’t the end-all and be-all of military costume. In some cases though, you have to wonder if it was given any thought at all."

Do the sample images support this wild hypothesis? Leeeeeeet's FIND OUT! Raise the gates!

1.) First image are the La Tene Gallic warriors masterfully illustrated by Angus McBride. What is the weird impractical element here?
2.) Celtiberians! So what's so wacky about these guys?
3.)  A Libyan. He DOES look weird, right? RIGHT?
4.) and 5.) Spartans.
6.) The Maya. Oh yes, we're definitely getting into the wacky territory.
7.) IIRC this is an Aztec warrior.
8.) Persian soldiers.
9.) Egyptians
10.) Thracian peltast.

I'm not a fan of generalizations. Quite obviously, saying that all battle gear was always practical is wrong. I don't think the Tumblr post tried to be controversial, but something about that "In some cases though, you have to wonder if it was given any thought at all." sentence rubbed me the wrong way.

Of course it was given thought. A lot of thought, no doubt. Ancient people weren't stupid. They didn't want to die. They protected themselves as well as they could. 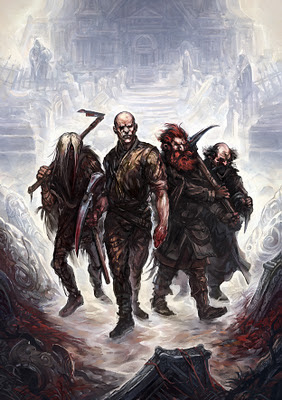