If you're a Tolkien fan, you've probably watched the Production Vlog 1 that Peter Jackson posted today on his Facebook page.

Here's a little analysis of the video shot by shot, picking out things that interest me.
I've focused on costume, armour and weapon design. 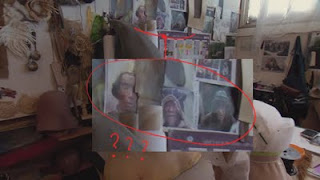 Comment:  This is a snapshot from the hatmaker's room, behind Gandalf's hat (and a funny "peasant" hat) you can see a bunch of photos pinned possibly for reference. The men in them appear to be Asian. Any experts on Asian clothing here? They look Siberian to me, but I know very little about this. Who could they be reference for? I doubt we'll get to see any Easterlings. Will the dwarven hats be this interestingly inspired?!

1. Axes. Look very axe like. And large. But hey, it's dwarves.
2. I was afraid this might happen. *sigh* Somehow dwarves must always use mauls.
3. Bow looks nice. I wonder if it's the "bow of horn" Thorin uses in the book.
4. What this thing is I don't even...I call it the "cleaver" for now. Looking at the blocky angular design, it's probably dwarven. Like an axe sword, maybe a "fun" play on the curved elven two handed swords from LOTR. The handle is long, so it's almost like a polearm. Eh, not a big fan of it yet.

Could I have some nice shorter swords for my dwarves, please?! :( 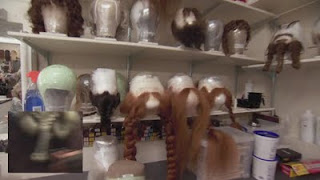 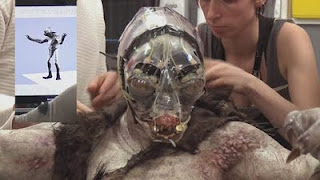 Comment:  This is interesting! Is it a goblin? A troll? It seems more beastlike than the LOTR orcs. And it has an animatronic face! O_O Weird stuff. Any ideas? 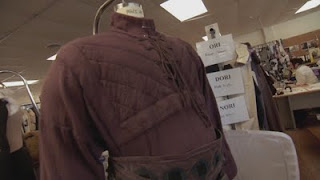 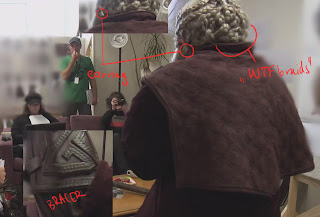 Comment:  What I like about the dwarves (what we've seen so far) is that they're colourful (as described in the book) and I'm getting the vague jewish vibe Tolkien hinted at. (also check out Donato Giancola's painting of the dwarves, they're quite similar) Notice the earring!
The only concern is the hair! What?! I like braids on my dwarves, but why so...knotted? Remember the hairdo Elrond had in his hair tests, that they had to change, because it looked incredibly girly? This is a lot like that! I hope it's just put up to allow for quick costume changes. :/ 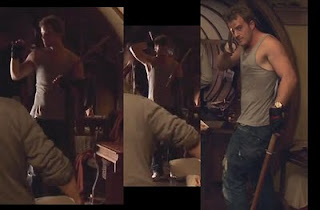 Comment:  Here we can see Fili walking around with two swords during the "scene blocking". Yup, dualwielding weeaboos will be pleased I guess.  -_-