5 Sins of the Sword in Fantasy Illustration

Today's post will be a very concentrated and shortened version of an article I've wanted to write for a while. I can't seem to find the time to do it properly, so I'll half ass it. Ha!

EDIT: As Jon Hodgson very rightly pointed out, I'm a big meanie and a party pooper, hating fantasy for its charm.
No, not really. ;) IF your goal is to paint somewhat realistic and believable swords, then you might want to consider this...

I'm sure fantasy artists often struggle with swords. Swords are among the most common weapons and objects in fantasy illustration and it's hard to get them right. How to design a proper sword that looks like it would work, that's a whole different story and I may do a blog post about that some other time.

Today I want to talk about mistakes and errors in painting a generic sword in a fantasy illustration. (or god forbid - in a historical illustration)

What are the most common errors and what other dangers are there while drawing a sword? I chose the main 5 that came to my mind.
(you can take a look at the two drawings I attached at the bottom to better understand the points.) 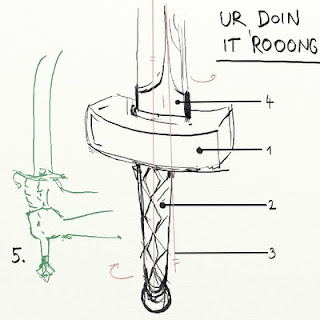 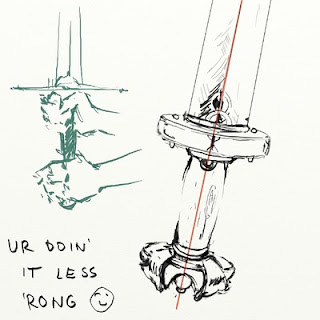 1) Proportions
Understanding sword proportions is absolutely key to achieving a believable sword, even if you're designing something ridiculously over the top for WoW. There's just too much that falls under this cathegory, so I'll only address my personal pet peeves.

- making the crossguards too large. European swords weren't massive lumps of iron medieval knights used to bludgeon each other to death! They were precisely crafted ellegant tools. The swordsmiths went as far as changing a blade's tapering not only in width, but also in thickness along the blade's length. So much effort went into making the blades strong yet light enough to wield comfortably.

Why on earth would someone put on a giant lump of steel to make the sword too heavy? it's nonsense, yet you often see swords with unbelievably large crosspieces, often because the artist didn't look for enough reference and had no idea how a crosspiece looks in 3D. (you can find sword photos from the side easily, but do you know how broad/thick a crosspiece usually is? What shape does it have in a cross section?)

- making the pommel too small. Or leaving it out completely! A pommel has many uses and purposes and it changed a lot through the ages and different places. If you're trying to paint a somewhat generic medieval-ish sword, it has to have a pommel. There's no way around it - look at reference, preferably of real swords from museums and observe the size, all the various shapes and forms the pommel could have.

There's more to proportions - the ratio of blade to hilt, shape of the blade itself and its profile...Too much to cover here. (more hopefully in the future sword design post) 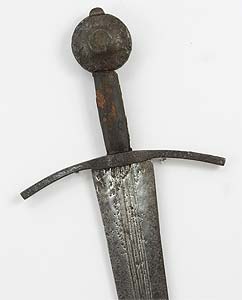 2) Oh SO long hilts
...on supposedly one handed swords. A minor thing, some may think. It just makes me cringe every time. If your character has a shield and a sword, a dagger in the off hand or if it's just obvious he's not using both hands to wield the sword - for the love of art gods! Make the sword a one handed one.
It doesn't make your hero a badass, it makes him look dumb.
Obviously, you can use a two handed sword with one hand, but it's uncomfortable and wrong. The long handle will only get in the way.
Feel free to paint an oversized sword if it's that kind of fantasy, but try to make the hilt shorter.
(and yes, I am aware of swords with hilts long just so that you can wield them both ways. A good example would be the sword of Balian in the film Kingdom of Heaven. I don't have anything against that, it works.)

3) Alignment of all the bits
Oh yes. It's still surprising to me how often I see this in illustrations by the absolute top artists in the field. A sword is a long object and usually has at least one axis going straight through it.

Be precise about this - draw a helper line and get all the bits on that line. Usually you can see the swords suddenly changing their angle in the hand holding them - the hilt and the blade are aligned differently.

And even if you get this right, there are other straight or dangerously curved lines you need to watch out for! - The blade has two edges (which need not be straight, often they're leaf shaped) and either a spine, or a fuller (what the laymen call a "blood groove". I'll get to that myth in the design post).
All of those need to be properly aligned in perspective in their appropriate planes!
(quite often you can see the artist drew the helper lines, but then managed to mess it up in rendering, a common mistake is rotating the blade around the axis, so it's in a different plane than the pommel. It's often quite visible on the fuller, because it catches light so well.)

It's hard. Often I don't bother with it too much. But it shows, it's immediately visible and even if you can't name it, you know there's something wrong with the sword. Just like if you mess up the perspective on a building. You can often notice artists weren't confident enough to draw a sword in space and the rotation fitting their pose, so they painted it flat facing the viewer like if it was laid on a table.
I can't say "don't do that". But it'll always make the poses of your characters holding the sword look unnatural.

4) Weirdness of the blade near hilt
There are two extremes I'll talk about here.

A) Brick Forte.
EDIT:  As Caleb pointed out in the comments - this is called ricasso. In the comments I explain why I think it's often used in a wrong way. Here's an example of a 16th century sword with a ricasso. That can still be considered medieval and I failed. ;)

http://www.a-work-of-art.net/page14.htm
Here' you can see a replica of a longsword with a ricasso. If you want to use this element - know why it's there - to allow for a wider grip.

You can see this in my drawing. I didn't find any good photo of this, because sword replicas are starting to get better. But I used to see this all the time on reenactment swords and wallhangers. And you can still see it in fantasy illustrations. It's that part of the blade near the hilt, where you suddenly don't have an edge and the profile of the blade is rectangular. It always bothered me - what was it there for?!

Someone once told me it was the forte, part of the blade which was used for blocking. Therefore it didn't need an edge an was left this way.
OK, that sounds reasonably plausible. But it's not true.
Yes, that part of the sword is called forte (or "the strong" of the blade). But that brick profile has nothing to do with blocking. (you don't usually and preferably "block" with a sword anyway. That's for a swordfighting blog post, which I'd also love to do, though)
I've never ever seen this thing on a real ancient or medieval sword. You can prove I'm a dumbass by posting a link to a photo of such sword, if you feel like it.
My theory is - it's a thing made up by modern replica manufacturers who grind blades from blocks of steel. Not knowing how to fit a blade with full edge into a crosspiece, they went the easy way - left it rectangular near the hilt.  (and hey, reenactors can "block" with it too! yay.)


TL;DR - Don't do it, it doesn't exist.
B) Blade cutouts. There's no excuse for this. I'll talk more about the construction of a sword in the blog post which will hopefully happen in the future. The main idea is - swords have to undergo a lot of stress and absorb a lot of shock near the hilt. Many swords taper towards the point.
There is no reason to make the blade more narrow near the hilt. None. Considering the preferable distribution of mass, mechanics of the sword, how it handles and what its purpose is, there is no reason to do it.
Yet, it's an evergreen of fantasy swords. Oooh, that tapering blade looks so boring, I'll add some spikes here, I'll cut this bit here out, it's gonna be AWESOME!
Also dumb. 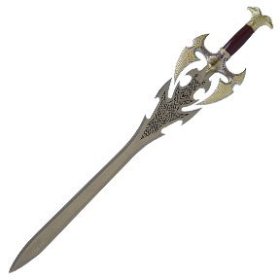 5) Holding it wrong
Usually with two handed swords. If you have a long hilt, why not use it? It's why it's long - it's a lever! You get more power and handling speed that way!
Look, it's easy - it's not a baseball bat, it's a sword. One hand under the crosspiece, one hand on the pommel. Done.
(again, more info about how a person stands and moves with a sword would probably fit into another post.)


That's all for today. Let me know if it's in any way useful and feel free to share this if you like.
Posted by Jan at 3:59 AM